By Avery,
October 16, 2020 in Photo Sharing and Discussion 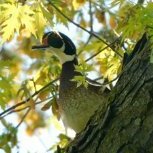 Poor old Vincent Vulture was left behind after the conductor wouldn't allow his carrion bags on board...

Jim had a knack for being in the wrong place at the wrong time.