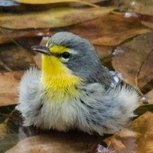 By GracesWarbler,
September 4, 2022 in Help Me Identify a North American Bird