I want to call this a Cooper's Hawk 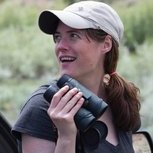 By pdx_bird,
October 1, 2019 in Help Me Identify a North American Bird