By The Bird Nuts,
April 1, 2020 in Photo Sharing and Discussion 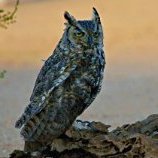 How about a Gamble's Quail and a Le Conte's Thrasher from this morning......Probably won't win a photo of the year award! 😀 but just might win this challenge?